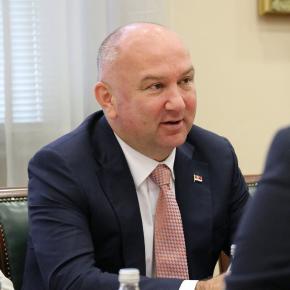 Minister for Innovation and Technological Development, Republic of Serbia

Nenad Popovic serves as the Minister for Innovation and Technological Development in the Serbian government from June 2017. He is a successful entrepreneur and businessman, who retired from his business enterprises in order to enter public service full time. He is applying his background and business experience to benefit the Serbian entrepreneurial ecosystems, and move Serbia towards a promising and innovative technological future. Minister Popovic is a fierce advocate for Serbian technology and innovation, and promotes it to foreign governments, investors, and global tech companies.
He graduated in 1992 from the Faculty of Mechanical Engineering in Belgrade and holds a master's degree and a PhD from the Faculty of Economics in Moscow. He held lectures at the Faculty of Economics of the Moscow State University Lomonosov and at the Faculty of Economics of the Moscow State Mining University.
He published eight books and more than 120 scientific papers from various fields, including economics, regional development, management, economic relations between Serbia and Russia, as well as the circumstances and prospects of economic development of the southern Serbian province of Kosovo and Metohija.
He was a Member of Parliament from 2008 to 2012, and also Deputy Speaker of the National Assembly of the Republic of Serbia in the period from 2012 to 2014.